Brittany and the west

Searching for a noveland original way to experience Brittany?

Highlights of Brittany at a glance

Searching for a noveland original way to experience Brittany? Seeking to merge sustainability, comfort, and insights to the depths of culture?

Finding France has melded history, ecotourism and authentic encounters together in an exceptional guided tour. As a small group, you’ll find nourishment that will tantalize your taste budsas you dine with the best of chefs and learn the intricacies of French Cuisine. Wonder at the foot of massive medieval fortresses, set forth to the open sea on a magnificent schooner, and gap with aweat many more wonders still !

Let’s design with you and for you an authentic and bespoke private tour in Brittany.

Our recommended 10-day itinerary in Brittany

Continue your journey in another destination 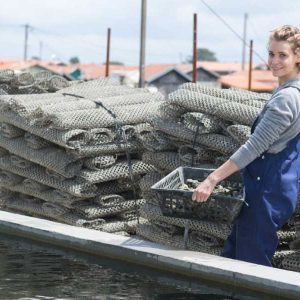 • Pry open the secrets of oyster farms with Inga. She’ll lead you through the oyster breeding pens in Cancale and let you taste a few specimens after that.

• Cross over from Saint-Malo to Dinard using the Sea Bus.

• Boast and brag with the best as you walk along the beachside quay in Dinard. The seafront has long been a shining bastion of “Belle Époque” architecture (XIXth century), and every year it hosts the British Film Festival.

• Stroll along the sidestreets of Saint-Malo, an ancient pirate city, and admire its XVIIth century city walls.

• From the top of the ramparts, the view extends to the statue of Jacques Cartier, the explorer who discovered Canada in 1534.

• Visit the house of a true corsair, a pirate-hunter.

• Visit the life-size reconstruction of a corsair frigate.

• Walk the halls of Limoëlou Manor, where Jacques Cartier lived for over 15 years. 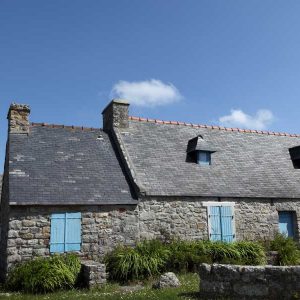 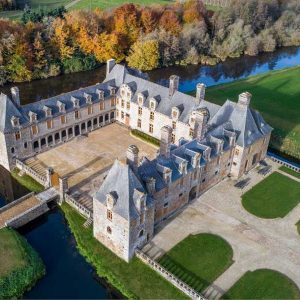 • Take a tour of Françoise’s organic farm and milk cow herd near Rennes. Transform milk into butter on your own and taste her specialty camembert cheese, the “Breizh’membert”.

• In Fougères, make rounds in the most ancient medieval fortress in all of Europe that is still in near-pristine shape.

• Let the medieval city of Vitré bring you back in time. The fortified castle, balanced atop a massive rock cliff will inspire you. Thread through the narrow streets of the inner city. Touch and admire the elegant townhouses with wood-beam and adobe walls tainted in hues of colors under heavy slate roofs.

•  Either in Vitré or in Fougères, thumb through ancient genealogical records to find the trace of your ancestors.

• The many historical sites in Rennes will enthrall you.

• From Cleopatra to François the 1st, a long line of VIPs is awaiting your visit… in a donkey farm!

• Cool down and soften up with a relaxing massage. 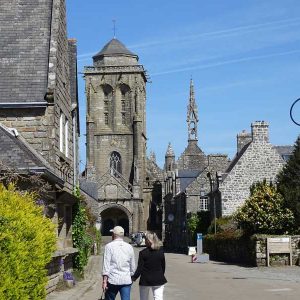 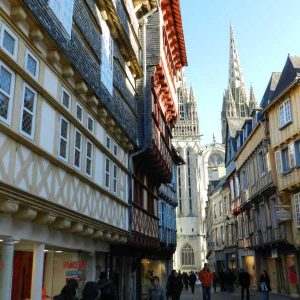 • Ride through the beautiful green countryside of Brittany.

• By foot, wander through Quimper’s historical city center, a regional capital with a strong personality.

• Meet up with American and Canadian “settlers” in the village of Gourin, bordering both Finistère and Morbihan.

• Discover the Musée des Beaux-Arts de Quimper, one of the main art museums in western France with its collections of paintings from the 14th century to the present day. 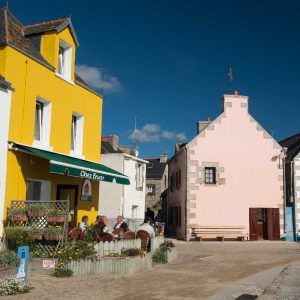 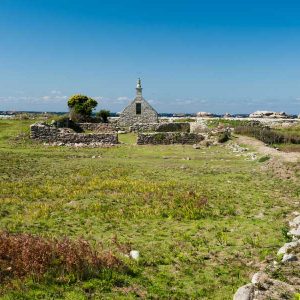 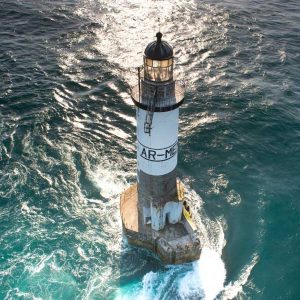 • All aboard the “Enez Sun”, a shuttle boat connecting Audierne to the legendary Ile de Sein, a tiny paradise lost in the vast expanse of the ocean.

• As you cross the iconic “Raz de Sein”, under the benevolent watch of the Old Lighthouse, the captain will issue you with the traditional Certificate of Passage signed of his own hand.

• The narrow streets in the island huddle together for warmth on this wind-battered rock. Meet with the stoic inhabitants who have even refused to allow cars on the island.

• Become, for a moment, the master of Light in the Goulenez lighthouse, the largest of the isle. Breathtaking 360° view.

• A moving testimony to the courage of the 133 island inhabitants who fought under De Gaulle in England during World War II, the historical war museum is worth the time.

• Slice through waves on a semi-rigid speedboat to discover the wild fauna around the mythical Ar-Men lighthouse built atop a bare rock in the open sea West of Sein island.

• Let Pierre, a nature guide, introduce you to dolphins and native seals as you paddle on kayaks around Sein.

2-day tour recommended: Spend a night on the island!

• Visit Auray, a typical medieval town, classified as a City of Art and History by the French Ministry of Culture. Follow the riverbanks to reach the humble but quaint Saint-Goustan port.

• Set foot in the historical center of Nantes, regional capital, with its majestic cathedral.

• Meet a young cook that raises his own snails as he tends both farm and kitchen.

• Witness history in the making as you visit the XIIIth century Castle of the Dukes of Brittany, where Duchesse Anne signed the edict that united Brittany and France.

• Meet inhabitants of a “Living Oasis”, an eco-habitat where several families live together and explore a more sustainable lifestyle

DAY 6: Nantes and its surroundings

• Take in the massive size of the largest ships of the world in the making as you visit the Chantiers de l’Atlantique shipbuilding facility. Currently under construction, the “MSC Virtuosa”, and the “Wonder of the Seas” ordered by the Royal Caribbean Cruise Line.

• A new tasting experience with Christian’s local Muscadet wine, among others. Visit his family vineyard and taste a range of white and rosé wines as he shared the challenges of sustainable growing.

• Bake your own bread together with Renaud, a baker who grows his own ingredients. Learn about state-of-the-art permaculture techniques for organic growing on his homestead. 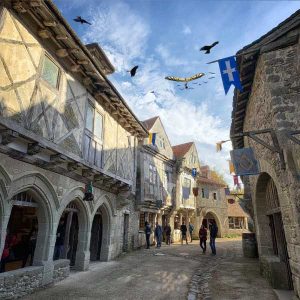 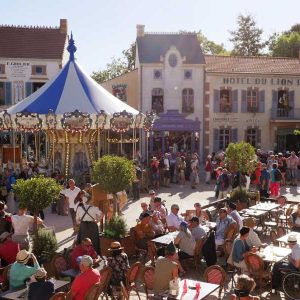 • The magnificent live-action shows at the PUY DU FOU will astound you and imprint key moments of history. The theme park has earned many awards from several international jurys.

• Dial time back to the IIIrd century after Christ and witness a masterful equine show in a 2 500 m² replica of the Roman Coliseum.

• Nature walk in the nearby Puy du Fou nature preserve. Safely observe over 1000 animals such as deer and rabbits, live wolves and even eagles.

• The night will see you welcomed as a close friend of late King Louis the XIVth, in a hotel inspired by the Marly castle near Versailles. 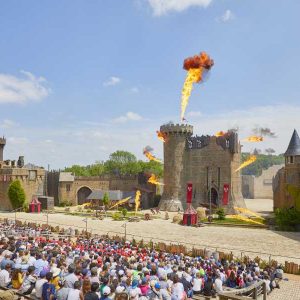 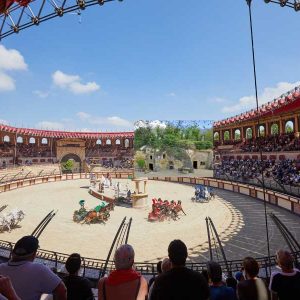 • Behind the scenes visit of the Puy-du-Fou theme parc by local guide Benjamin, one of the evening show’s main actors. Meet Falconry masters and their 530 birds of prey.

• Visit the workshops of passionate artists and craftsmen (sculptors, wooden clog-makers, cobblers…). They’ll show you techniques that are centuries old and demonstrate that the Middle Ages were far from being the Dark Ages.

• Attend the “Cinéscénie”, the World’s largest evening show ever held: lights and sound will highlight the deeds of over 2500 actors as they mark the milestones of France’s past on a scene that spans 23 hectares.

• Falconry training with Ritchie: unveil the secrets of master falconers and learn to guide majestic birds of prey in their flight. 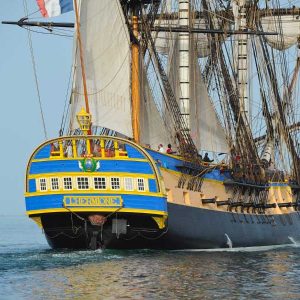 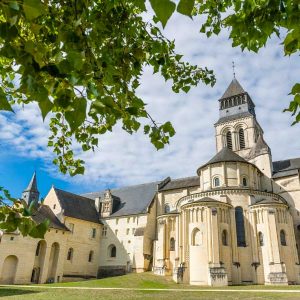 • Visit the “Hermione” in Rochefort, a full-sized replica of an ancient 3-mast military frigate which La Fayette commanded in 1780 as he helped Americans fight for their independance.

• Sailors will share their daily routine and you’ll get to visit their quarters aboard the ship!

•  Charlotte is an exceptional guide who will introduce you to the Royal Abbey of Fontevraud.  Founded in 1101, it is one of the largest monastic compounds of Europe. It is among the World Heritage sites under the patronage of UNESCO.

• Immerse yourself into seas of knowledge in the National Museum of Sea and Royal Rope-making, in its heyday the place where the longest ropes of Europe were wrought.

• Work out in the Accro-mâts theme park, an adventure park 100 feet (30 meters) up in the airs among the masts of a massive sailboat. Open to families with children.

• Explore the depths of the sea and its mysteries in the La Rochelle aquarium. 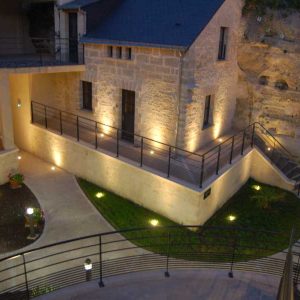 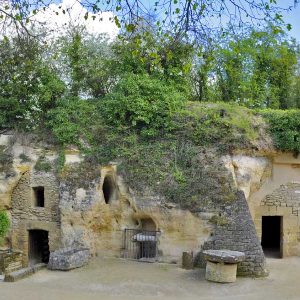 • Delve into the troglodyte cave village of Rochemenier with Annie, and visit an underground farm dug out by the work of toiling peasants from the VIIIth century onwards.

• Roam around a natural rose garden that boasts over 1000 rare rose varieties.

• Meet vineyard keepers converting their fields to organic agriculture – with a democratic touch! – and try out their local wines. Chief among them is the “Coteaux-du-Layon”, a soft, sweet white wine that is only grown and crafted in a small portion of the Loire valley.

• Lunch in a troglodyte restaurant inside the network of caves, and take hearty bites of local medieval delicacies such as “fouaces”, which are breads sliced and stuffed with fillings like rillettes, butter or cheese.

• Safely ride a hot-air balloon above the breathtaking scenery of the Anjou region.

• Visit the Fontevraud Abbey in a fun way.

Fly away to Brittany and start your journey !

Our top journeys in France

We have much more than Brittany to offer you… Please have a look at our other itineraries below.
Our goal: to make you live an unforgettable experience in our beloved France.